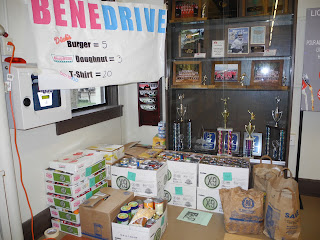 788 CANS!! 850 POUNDS OF FOOD!!
That's right, that's the result of the BeneDRIVE canned food drive that was held for a week at King's HS (our school), which only has about 600 students. We took the traditional idea of a canned food drive to the next level (Benelabized it), branded it, and it was massively successful! We delivered a total of 788 cans, which weighed 850 pounds, this weekend to the Food Lifeline, a local hunger relief organization. The cans average out to about a dollar each, so we raised roughly $800 in a week! It was a blast working with the school, and we're planning bigger events in the near future.
Posted by Jack Kim at 10:16 PM